Thanks to C.L. Naylor for this brilliant review of ‘Fragments of a Dream’

“If only Angelos and I could rewrite our lives on a blank page equipped with fresh wisdom and insight.”

Describing Larrea’s debut novel as a simple love story doesn’t quite do it justice. Considering the ageing population, marriages that collapse in later years and the need to be loved, it is refreshing that the protagonist is in her senior years, close to retirement. It is a romantic story of people in the third age of life rediscovering themselves and their loved ones.

Rosie Burden is a survivor and the novel has a positivity about it in spite of the setbacks. “A lifetime of sacrifices” is how she described putting Harry first. No tell-tale signs that he would leave Rosie for a younger woman. There were tensions throughout their marriage which affected their offspring, Lisa and Matthew but nothing unusual compared to other families. Rosie had seen her marriage as an insurance policy against the terrors of old age. A “death sentence” makes it a bit melodramatic but it does come as a shock to Rosie as the pessimism sets in for a while: frailty, senility, loneliness and decrepitude. Sounds scary, doesn’t it? Is this what’s in store for us?

Harry and Rosie had been an item during their 1960s university days. He seemed arrogant. In spite of a virginal Rosie, naïve and lacking in confidence she was attractive and was hungry for knowledge which appealed to Harry. It seemed inevitable that they would remain an item, marry and set up home together which is in fact what happened.
Rosie’s first holiday abroad to Greece with fellow university friend Maggie Burns coincided with Harry’s climbing club trip to the Alps. Rosie and Maggie chose to visit Hydra, a beautiful island described as Bohemian, unspoiled and picturesque. Rosie fell for a 19 year old Greek Adonis “as gorgeous as a God on an ancient vase.” She had been “instantly captivated” and “mesmerised” by him “frolicking like a dolphin.” So different to Harry. Was this just a holiday romance?

A photograph take in Hydra in 1966 was a reminder of their youth, beauty and love. Her fling had cast a long shadow on her marriage and Harry reminded her of this when he wrote his parting note to tell her he had met someone else. Then walked out on her.

So, you can see where this is leading, can’t you? Rosie yearns to return to Hydra after 43 years to find her lost love. She didn’t want anyone to know the reason for her return because she’d have been labelled an “old fool” pursuing a “mad quest.” Trying to relive the past, for what it was worth, she invites Maggie once again who invites one of their university friends, Mike Knutt known as Knuttsie. Mike had had a crush on Rosie all those years ago and still carried the torch for her having had three disastrous marriages and three divorces. When Rosie feels at her lowest ebb he proposes and is sadly and inevitably rejected. A wonderful friend but not lover material.

Difficult to know what Rosie expected to find returning to the scene of her lustful youth. Hydra was exactly as she had remembered it but there had been changes. The flat-roofed house where she stayed didn’t seem to be there and the beach had been altered with the cliffs eroded and a few trees left. Rosie’s excitement and anticipation soon changed to disappointment. He wasn’t there and it had been a wasted journey.

“It was a mistake to revisit the past, dangerous to dream of the future.”
So, whilst Rosie tries to relive her youth we are reminded of contemporary events happening in Greece: unrest in Athens, angry protests, petrol bombs thrown by anarchists, general strikes, airports and ferry terminals closed. Hints of realism.

And what of the enigmatic, misunderstood Angelos? A fascinating character, more husband material than Harry Burden, full of passion. We meet his nephew Nikos who becomes attached to Rosie’s granddaughter, Becca and with the next generation with their level-headedness there is every chance of love blossoming and lasting. What more can I say?

” Grasping at the past was like climbing the wrong way up a down escalator, refusing to believe it was stronger and faster than you.”
Love makes fools of us all, regardless of age.

Available on kindle and paperback: ISBN: 978-1-79 153-908-5
Review by C.L.Naylor.
Copyright 2019. Permission must be obtained from the writer before any of this is reproduced in any form. 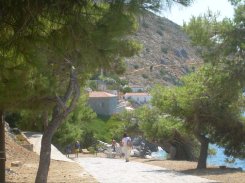 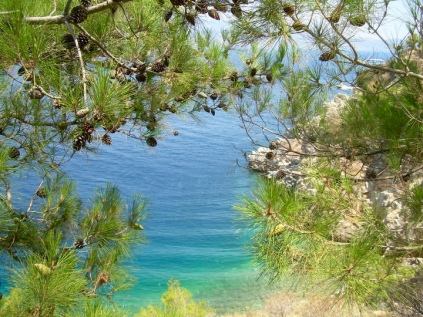